Deep in the forest I have finally found kaolin

There is exactly one area in Slovenia, where geologically kaolin was formed. And in that valley it was mined in the past. Today all the mines are closed and sealed, but in some places you can still find a hint of that material. I have looked for it a long time, and now I finally found it.

Kaolin is one of the 2 ingredients for making porcelain.

Slovenian kaolin is in fact an illite clay. Kaolinite is present, but only in traces. The main component is illite mineral. But for commercial purposes the ore was named kaolin and that name stayed until today. I will use the name kaolin as well.

I read several book about Slovenian clays and kaolin, and learned much from it. Informations from the books and survey of satellite images of the area led me to explore on foot. I hoped I could find kaolin in the open pit, and I thought I did, but that turned out to be calcium clay. You can read about it in Kaolin? article.

I drove through the Črna valley few times, but could not find anything other than proof, that everything the books write is true and that kaolin should be there somewhere. There were greenish and black shales, rocks to be found next to kaolin, but no kaolin.

This time I took another angle, and went to the valley from another side, driving around high hills. I was observing, and looking at geology of hilly landscape. I could see most from the road cuts or micro landslides. I decided to park my car near the location mentioned in kaolin book. The location is associated with historical site of kaolin exploitation.

I took a half hour walk into the forest, using forest road. I observed: black shales, green unidentified rocks maybe green shales with chlorite giving green, pink rocks, for which I presume are K feldspars. Forest road was somewhere cut deep, so brown clays turned as well. I heard a stream running on my right side. There was one open area with steep hill cuts. They looked brown, but among the brown clay I noticed spots of green-grey material, and few small spots of white. White. I collected it, but could not separate it from the browns completely. I bagged each colour of material separately. I went on. There were cut trees and the smell of pines. There was material pushed aside the road and big tyre marks printed on. Someone was working there recently. Few minutes further there was a spot with light green shaley rocks, interesting to stop and look. And a little further on, after I crossed stream, I saw a clean black slope made of black shale. Opposite a white one. But higher in the mountain, and I could not reach it. For sure, I knew that slope was made of kaolin. There was no road, path, and it was too steep to go trough the raw forest. I went back and found another road, cutting steep into the hill, going up in serpentines. I followed it. It ended with pines. I pushed through, pines ended. I was looking at the white slope. I kneeled, catching for my breath from the climb and looked. I heard some noise. A fox ran away, I could see her tail from across the slope. Fox is a good sign, I like foxes. It was so steep, that I decided not to try and reach the bright material. But I thought again and went after it. I sat on a pine, which was growing horizontally. Pine was between my legs, and as I was riding the pine I collected a small bag of sand like material. I did not doubt it wasn’t that, what I was looking for. I thought of Peter and thought if he saw me, he would not let me do it. It was too dangerous and I could easily fall.

I went back, and fog was slowly coming up the hill. Rain started to fall and it was time I went back home.

I put all the material to dry immediately upon my return, and next day put it in water and pour it trough the medium sieve.

Today I have my first lump of soft dirty kaolin in my hands. It is not white, but it is a start. I will go back soon. 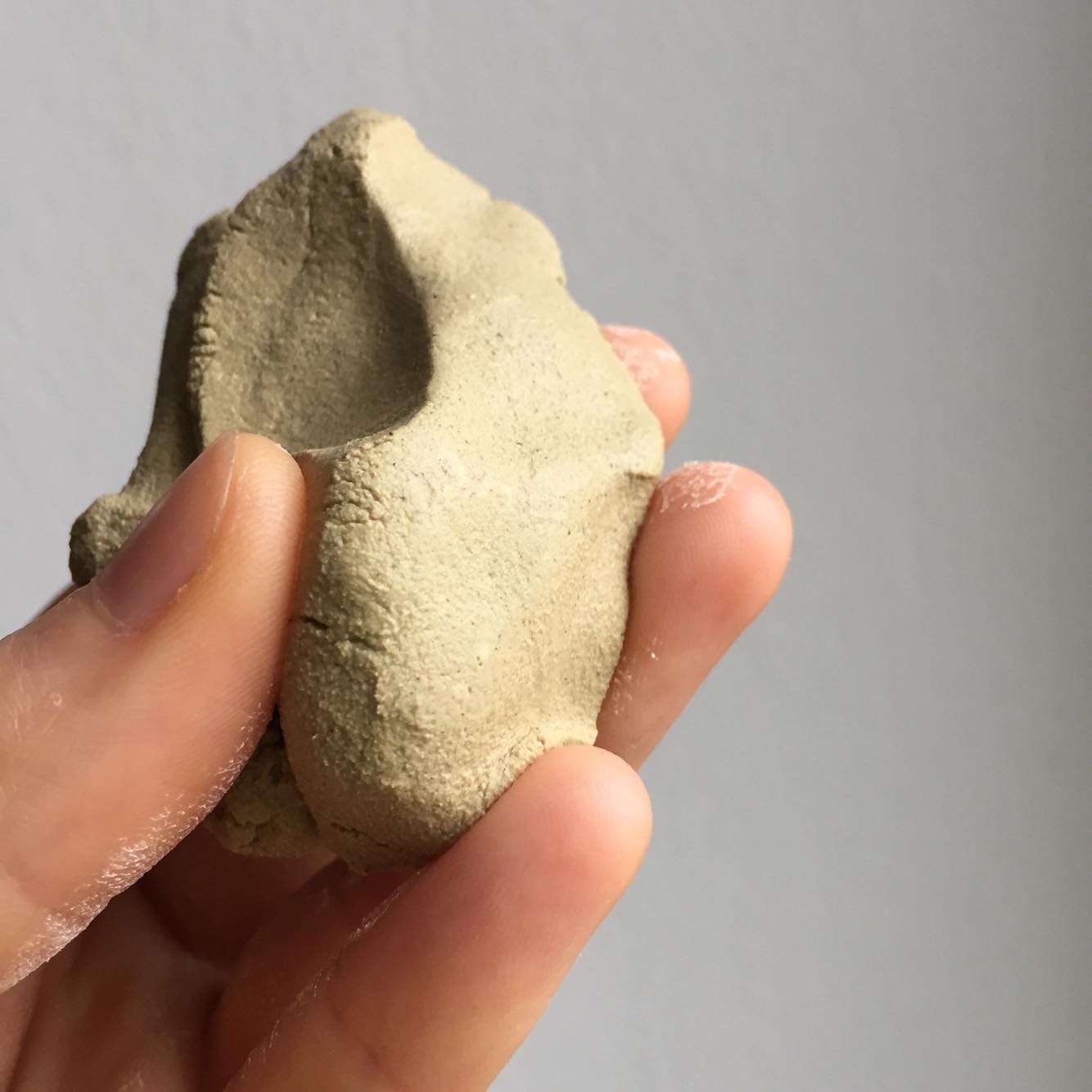