I moved to Amsterdam. So from now on my posts will be in English.

I still haven’t settled in. I am trying to build my studio as soon as possible. I have two spare rooms in the apartment; one is on the rooftop. It is a very small room but it has 3 window walls. I wanted to be in the warmer room below, but the light does it’s magic and when the sun shines it is so bright that the tiny room becomes a spacious warm bubble with the nicest view. I brought my Shimpo wheel with me, I only have to protect the floor and walls against dirty clay work. I hope I can start the wheel tomorrow, I had a long break.. I am full of new inspiration. I already found a small store with clay one street away and on the same street I always look trough the window of a one studio. It has no name but I can see the wheel, the kiln and some molds and on the walls there are few large plates hanging with bright and colorful crystalline glazes. And if I type keramiek Amsterdam to Google I get 4 matches only in my area. I also visited Ceramics center Netherlands Keramikos in Haarlem on the outskirts of Amsterdam, which is like a huge hall where they sell everything a potter could imagine. I was there quite a while but only bought one pack of their clay, because I couldn’t carry more. I am now making my wish list for ordering. And last Saturday I visited a Amsterdam ceramist Marjoke De Heer. I am drinking water out of her cup right now. I bought two. She is a specialist in celadon glaze fired in reduction. She is a very nice person and she offered us a tour trough her gallery even though she had a broken leg. She had the most beautiful gallery I have ever seen. So elegant and with all the lights carefully placed in all the right spots. Maybe I also think that way because I really liked her ceramics. She mostly does celadon, which means that the shelves are in subtle greyish green color, typical for celadon.

Celadon is a term for ceramics denoting both a type of glaze and a ware of celadon (color). This type of ware was invented in ancient China, such as in the Zhejiang province. Celadon has since been spread to various regions in Asia, such as Northern Thailand. Celadon glaze refers to a family of transparent glazes, many with pronounced (and sometimes accentuated) cracks in the glaze produced in a wide variety of colors, generally used on porcelain or stoneware clay bodies. Celadon glazes have such popularity and impact that pieces made with it are often referred to as “celadons” (Wikipedia, 2012).
I once did a post on celadon glaze which I made myself from a recipe I got from my glaze book. But since I fired it in a electrical kiln which means oxidation, the color was more yellow-green, like mustard or olive oil, but still nice, especially on porcelain. Porcelain reacts differently with the glaze than the clay does, it also makes nicer cracks. Marjoke uses gas kiln so it’s a reduction atmosphere and the glaze is then more grey/blue and less yellow. Marjoke’s gallery is in three different rooms. Each is different. The last one is like a living room with dining table and all is filled with her pottery of course. I couldn’t see it all precisely because she was so nice, asking me all the questions and making conversation with me like potter to potter. She even googled me, after I wrote her about visiting her:) I then bought 2 cups (one in porcelain and one in clay), one was a gift from her. So I went home, smiling and full of new information and contacts. 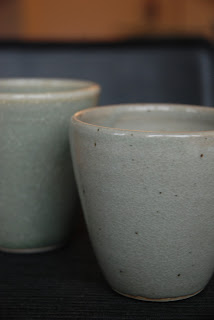 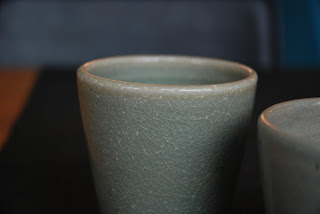