I was in London this weekend mostly because of Ceramic art London 2013 which was held in Royal College of Art. This was my first top-end show of ceramics; it was international and 2 of my favourite ceramicists were there: Jack Doherty and Shinobu Hashimoto. It was different than Gmunden pottery market, although I remember Christiane Wilhelm from Gmunden. Show was really excellent, inspiring and it also gave me new motivation and a confirmation: I want to do this, I want to get better, as good as any of them. If I’ll try enough, someday I will be. There was stoneware and earthenware, and most of the artists I liked was surprisingly using gas or even wood fired kilns. Yes, I think only one had wood fired pots. It was the first chawan I picked in my hands, really magnificent piece, at a cost of £1400 (by Uwe Loellmann). But I was impressed the most by Fred Gatley. He uses river materials like sand, rusted nails, broken porcelain and incorporates it in red clay or bone china. He then fires pinched pots and polishes it. He also uses washed wood and makes bases. Every piece is recycled and has a unique story. Before I went to London I saw a nice video of Lisa Hammond, so I payed attention to her pots as well. In the end I was so enchanted by her (I also talked to her) and her pottery that I bought myself one cup. Well it was a cup from her apprentice since I couldn’t afford Lisa’s, but the style, glaze and feel was Lisa. I cannot stop looking at this cup, every angel makes it different. The glaze is amazing: shino in a soda gas kiln: 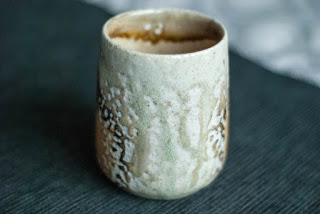 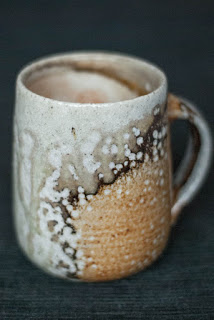 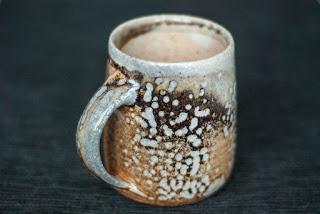 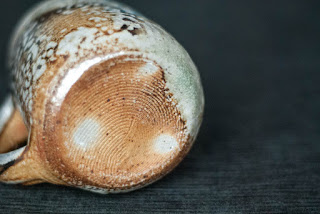 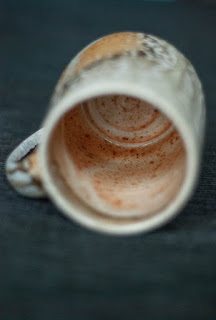 I also talked to Jack Doherty and got one of his cups, which I wanted for a long time: 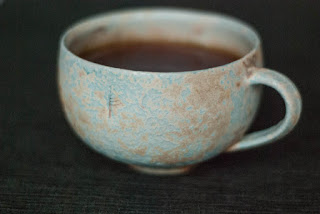 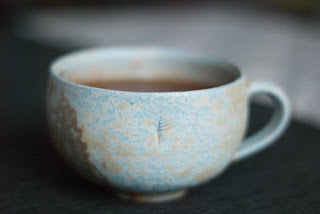 He throws porcelain, so the base is snow white. He then adds few layers of slip made of red clay. He probably sprays it randomly, so different thickness of slip give different shades of red: from charcoal to light orange. He only fires it once in a gas kiln and while firing he sprays it with mixture of salt and maybe some pigments through a hole in the kiln. Mixture evaporates immediately and where the vapors touch the pot, an ice glaze is created. Te cup is so amazing: fresh because of porcelain and blue glaze, but earthy because the earthen colored slip. It is also very strong, it’s relatively thick, so I am not afraid of using it (porcelain cups are usually thin, since translucency is it’s interesting quality if thin). And Peter got this cup by Christiane (he likes it thin and black): 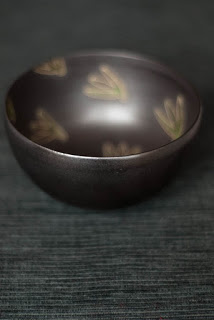 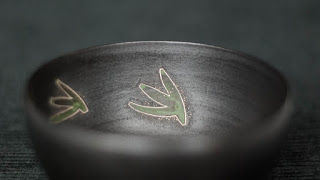 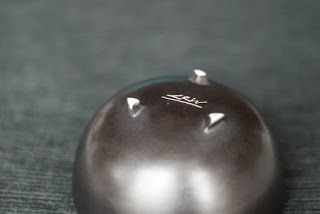 I have 3 new cups and I already had excellent freshly roasted ethiopian coffe with each. And in a month I am going to Japan, my pottery wonderland, so be prepared for a whole lot of posts!