Kaolin is a material porcelain is made of.

Back few years ago, when I did interview with Vesna Vidrih, we discussed about materials. She is a well known Slovenian ceramic artist, who works with porcelain. In the conversation before the interview, Vesna told me, that Slovenia was once a small producer of porcelain tableware. That we had big tunnel kilns and our own kaolin pit. At that time I only had a little knowledge about materials. Few years after, last year to be exact, we hosted an American artist Antoinette Badenhorst. She gave a workshop about porcelain in Kamnik. My friend Tatjana, she is from Kamnik, Antoinette and I had a conversation about porcelain. Tatjana talked something about history of kaolin mine in Kamnik, but she didn’t knew much. We only knew it was permanently closed. Later on I did another interview With a former employee of Eti Svit Kamnik, a factory that is producing technical ceramic, but in the past was once producing porcelain tableware as well. I am not sure Eti Svit used kaolin from the area, because tendency in Slovenian former factories was many times to go for the cheapest materials possible, in this case maybe Czech kaolins, not giving concern about the future, investing in local goods or future development. They were short sighted, and that is why many of these companies fell apart. I am a little angry here, yes. Same thing happened in Novo mesto and Liboje, where producing quality tableware is just a whisper from the past now. Anyway this lady – she is now in her 80s, a former employee of Eti Svit, gave an interview about ‘majolka’ – majolica production. ‘Majolka’ is a special shape of a jug, but also a technique for painting on white earthenware.  She was so shy and not sure whether to give me an interview at first, because she was concerned how she would look like on camera, or how her words would come out of her hear. She was old, she said, and she had difficulties to remember things. She had a paper with her and on it were written important dates and names, she would look at, as she would forget it while the interview. She gave a very nice interview. Maybe some tears appeared on both sides of the talk. She would talk about how it once was, her youth and how she became employed in the company. She would tell storied and details from some special times. She would say about glory and fame ‘majolka’, how important it was a a symbol of Slovenia – Yugoslavia, and how paintings of events of importance were painted on these jugs as a markers of time. She was one of the painters. She explained about the position of these ladies-painters in the company, how they were shifted up and down, as the management of Eti Svit felt like it; if the costumers would came in to order and if they were important and wealthy people, company bosses would be proud and showed ‘majolcas’ to them as their prized possessions, that they would show off and show these ladies as treasured values of the company, but in real life, they hardly even had a space to work from, were paid by the amount of work they produced, and their finished paintings were not treated with care or respect from the people who fired the kilns. Many times kiln firers got drunk, and destroyer whole kilns of works, hours of dedicated painters and potters who made the white bodies. At the end she said: ‘As long as I will live, I promise, I will try to keep ‘majolka’ alive.’ It was a very touching interview. This interview made me promise to myself, that as she would try to keep ‘majolka’ alive, I would try to find Slovenian kaolin.

Peter ordered me to get some freshly milled flour from a shop, so he could make some sourdough bread that day. It was in the middle of the afternoon, a busy hour to go driving and shopping in Ljubljana city center. Afterward I was on my way to Kamnik, to se the opening of Živa’s exhibition on wood-fired porcelain. Before the opening and after flour shop, I wanted to go look for kaolin. But I was late. Traffic was so busy and day light was getting scarcer. I did’t thought of the light before. The only thing that was on my mind was kaolin. It was loosing light and I drove towards Kamnik.

I did a thorough research prior to visit on site. I ignored all the people who said, that the mine is closed, that it is even being ‘sealed with concrete doors’, that kaolin production days are over. Yes, the mine is closed, but kaolin must still be there. I just need to find it. I asked locals about it, I asked geologist about it, I read articles from past, and I surveyed the area with Google Maps. I also learned that this is the only known kaolin deposit in Slovenia. I found several conclusions in my findings:

1. kaolin mining was not actually kaolin, but a similar primary clay made of illite minerals mostly and kaolinite minerals in traces, but it was still considered as kaolin and used in ways kaolin is used for: mainly ceramic and paper production.
2. This kaolin was not very clean, so company stopped existing once the paper industry in Slovenia stopped using local materials, and started importing kaolin from other countries in Europe. That happened in 1996.
3. Mine was closed, but there were some open pits left there. Open pits!
4. I found an open pit on Google Maps. So few days later I am on my way there.

I turned right from Kamnik. I drove into narrow valley, a gorge almost. I was driving under a mountain of Velika Planina. There were few houses there, and a stream. Mountains with forest from both sides. Light was there long gone, long before it stops shining outside of gorge. I was a little, not scared, but not sure I am ready to walk in quarry with vertical cliffs in the night. But I just wanted to see, what was there. I drove past the memorial, which the article mentioned. On the other side of the memorial entrance of the mine should be, the article wrote. But I was looking for a quarry. and I found one. Gates were opened. There was a sing on it “Sand Quarry”  and “Do not enter” but I drove inside. It was almost dark. I just decided to step outside and look, not walk anywhere, it might be dangerous. I stepped outside, it was cold and in the distance you could see small lights of houses. It was quiet but I could hear the stream, some cars driving by every one in a while and an owl from the forest. Mists were rolling among the forest tops. There ware quarry machines on the left and some hills of materials on the right. I headed towards right. The hill in front of me was opened, cut and mined for minerals. It was raining in the past few days, so there were puddle on the ground. They were white! But I was walking on sand and not clay. I made few steps and saw a lump of something, I picked it up and it was – clay! White! Is it kaolin? I headed towards the hills of apparently excavated materials, and looked at a white mountain of clay. Is it kaolin? There were many kind of colours of clay, some soil and sand as well, all mixed. Did they considered this as tailings? Maybe. A new road was cut from this materials as well, leading into the darkness. I did not go there to check, another day, I thought to myself. I went back to the car to gets some bags. I quickly went to the white hill, collected some samples, and head straight back. I only needed a sample, a proof, so on another day I could go back and get some more. As I was collecting two birds flew me over, loudly. At first I thought they were crows, but they were not; they were 2 herons. I took it as a good sign, since I like herons very much. I went back to the car, opened one bag, and looked at it closer under a light. It was sticky and colour of a powder. Is it kaolin? 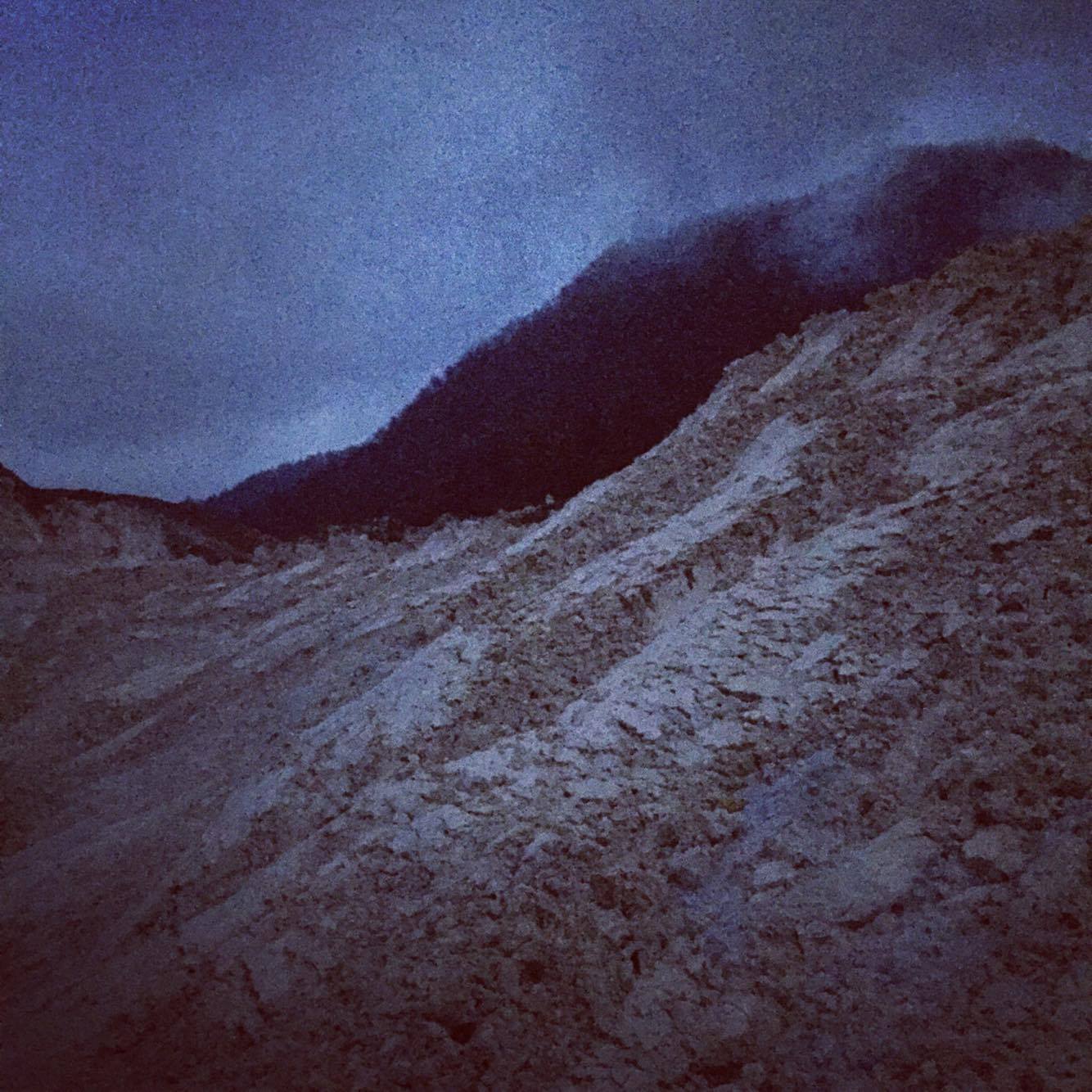 After I went back to see Živa’s exhibition. It was beautiful. I gave her a bag of material I just collected as a gift, I guess she will appreciate it. Next day Peter was driving the car and was mad at me because the steering wheel of our car was white. I forgot to clean hands the day before, out of too much excitement.

I checked at the quarry company online and found: ‘B08.120 – Pridobivanje gramoza, peska, gline’, meaning: B08.120 – Extraction of gravel, sand, clay. I tried making a small pinched pot out of it, but it was cracking too much, just like pure kaolin. Is it kaolin?

I took some photos and compared it to presumed kaolin I found in Straža. Very similar colour, but completely different composition. Is it kaolin, one or the other, both perhaps? Only firing will prove me if it is: if it is it will fire and become stronger, and if not, it will fall apart. The only other material I can think of is whiting – Živa told me one how it looks like and that she found it under mountains as well. Now let’s wait, fire it and see, if this is kaolin.