I met Maja and Amanda at a tea ceremony we had few weeks ago. They are currently planning to grow a herb garden with local Slovenian herbs to produce Slovenian tea. They asked me if I could make ceramics for them, out of their local clay. So I assigned them the first task: ask the locals where their clay is. We got very generous answers and information; no wonder – the valley is laid on a bed of clay. Recently they found a cave, which was supposedly an ancient Roman sacred site and in it were also some pots. They say Roman, but it could be older – at least they look older to me. Maja’s uncle was kind and showed us photos of these pots. Ceramics was and is where the clay was, and so it was present in Zadrečka valley. What it also attracted me going there, was knowing that Zadrečka valley lies next to Črna valley – where our precious kaolin is. If you head from Ljubljana, you have to drive trough Črna, to get to Zadrečka. Driving in Črna valley is like driving in a treasure land for me, knowing that treasures are all around me, I just need to find it. After Črna, you cross Črnivec pass, and fall straight into Zadrečka valley. Forest covers both sides, and you can see giant logs and wood stacks around many farms. It was strong winds this winter, which brought down many trees and did a large damage to our northern forests. And now it is the owners’ responsibility by law to clean their forest against further danger of bark beetles. One farm caught my eye, a deserted one, old and traditional – with barn on one side and main house on other. It was surrounded with logs from forest behind it.

Finally I arrived do Gornji Grad settlement, and the first thing you see is the main church, which also happens to be the largest church in Slovenia. Maja and Amanda wish tho plant a herb garden in the church’s garden.

Our first stop was Maja’s uncle’s house, a fourth generation blacksmith. He was excited to show us where he found clay. On his field few hundred meters from his house. We were five people, with buckets, shovels and wheelbarrow. We only had to remove about 20 cm of vegetational cover to find sticky grey clay. I assumed it spreads through the whole valley, which we confirmed later going to several other locations and collecting different clay samples.

Second location was… the beautiful old farm from before! Maja, an architect, also saw it as a special structure, and she even made a Master thesis on it – how to bring it back to life. It comes with hundreds of acres of forest and a thermal well, so the market price for it is rather high. A nice avenues of old trees is leading towards the house’s yard. At the back of the yard we instantly found a pile of dirt, driven from the forest, when they were clearing and bringing the fallen trees. The dirt pile seemed random, until I noticed some white clumps mixed on top. White dirt is like a magnet to me. Everything that is white presents a possibility. A possibility to be kaolin. And statistically looking at the geography, there is a high chance to really be kaolin. Only one mountain separates the main kaolin valley to this one. I chose the largest bucket and filled it with a heap on top. Some chunks were very white, some already mixed withe olive coloured clay. The same combination I found few months earlier, few hills away. But statistically speaking this white could also be calcium clay. Both kaolin and calcite were mined in Črna. I will not know what it is until I fire it (I open the kiln today!). What also reminds me I need to learn other methods of recognising rocks, so I can know what it is before I need to spend few days and wait for it to be fired. I am still in a search of a geology friend 🙂

We collected additional clay from the near forest and then moved to a third location. Before going I wanted to see inside the farm, inside the house. I tend to admire historical houses, and that was a treat for me. Beautiful architecture with arches, wooden floors, steps, painted walls. We even discovered old ceramic tiles from heating kiln with amazing flower decoration.

Abandoned clay pit was a third location. There isn’t much to say rather than: I wanted to bathe myself in that clay pit with that dry clay! So much clay, so much excitement! We also discovered interesting blue spots in grey clay, which I assumed they were vivianite. I asked my friends on IG and we quickly confirmed it was. Later I also found one geological survey of this clay pit, which name is Hom. Yes, vivianite is present. I assume it was formed with decay of sea animals which contained calcium and phosphate. Vivianite, Fe3(PO4)2 · 8H2O, is a ferrous iron phosphate mineral which forms in waterlogged soils and sediments. It is called a death pigment, or blue iron, because it often forms in an reduced environment, many times covering the bones of buried people and animals. I can connect its blue colour to blue colour formations of irons on ceramics in wood kilns, at lower temperatures – also a reduced environment. Anyway, we had much fun with the blue dots. I expect it to fire red in an oxidation kiln.

After clay pit, we drove back via romantic route. We ascended on a nearby hill, where we could see whole Zadrečka valley. A linden tree and bench beneath it are typical attributes on hills with views, and so it was placed here, on our hill. We sat for a while, and then moved to our last location. We went to see Maja’s family old farm, abandoned, but taken care of. In the hills of forest looking over Gornji Grad. Beautiful two traditional structures, one mainly covered in wood, other in cream plaster. Looking closely at the plaster, I also noticed some white lumps. Could it be, that they used neighbouring valley’s kaolin for whiteness? It could quite be so. I collected a small piece, which was detached, from the ground and carefully put it to my pocket. Pocket already contained blue lumps of vivianite, and random, but carefully selected rocks from every place we visited. There was also a very interesting land opening by the side of the road leading to the old farm. It was white that I screamed ‘Stop the car!’. I collected that as well. It could be one of 4 things: very white limestone, or calcite, or dolomite – which I am currently not skilled to recognise in nature, or feldspar – a predecessor of kaolin. I collected it for further testing.

We finished. We came back with 7 buckets of material, after 6 hours of intense digging. I was exhausted, dehydrated, overwhelmed and happy. I went back home, hungry and thirsty for more, with no energy left, but I stopped at the quarry in Črna anyway, and collected some black clay. Like my car was lacking of clay.

Now I need to test, process and prepare clay for making cups, for local tea from Gornji Grad. 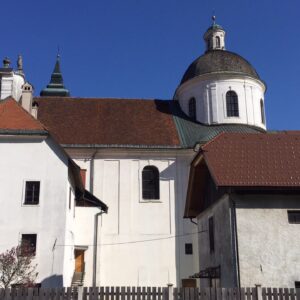 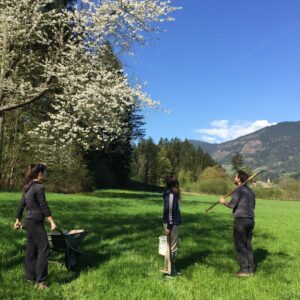 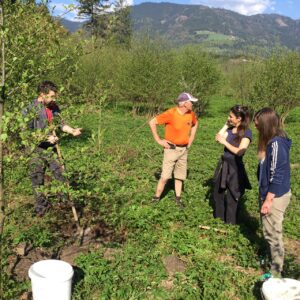 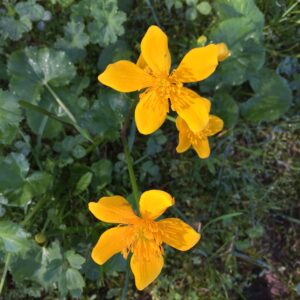 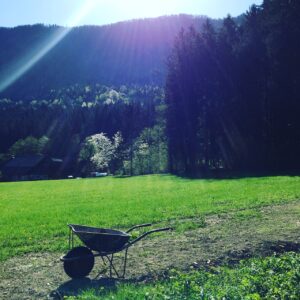 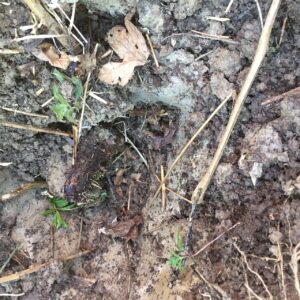 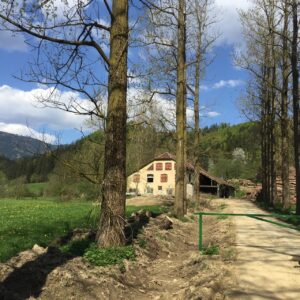 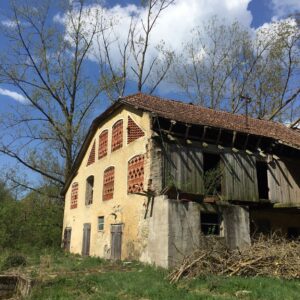 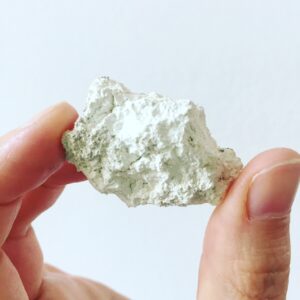 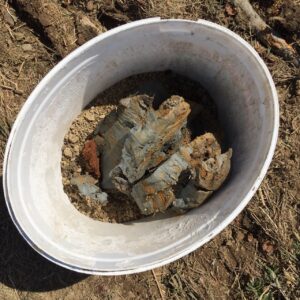 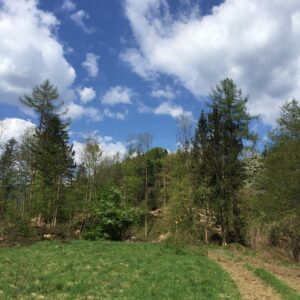 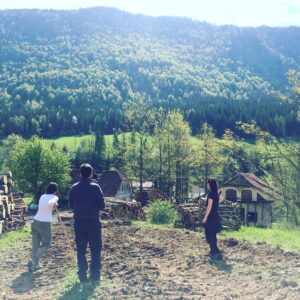 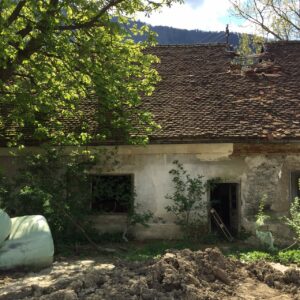 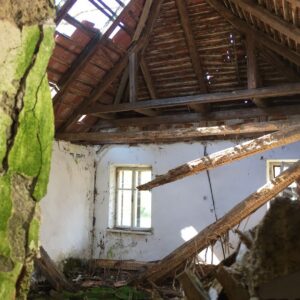 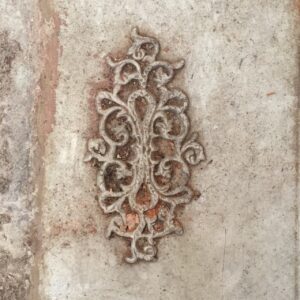 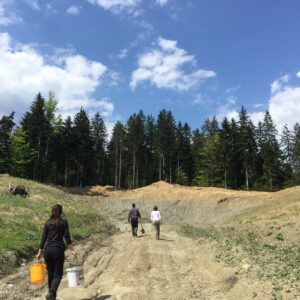 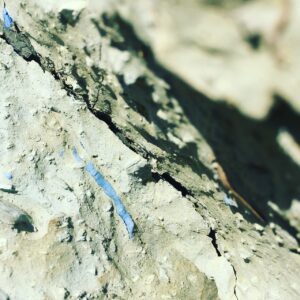 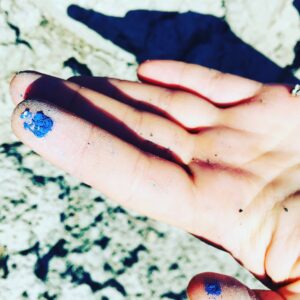 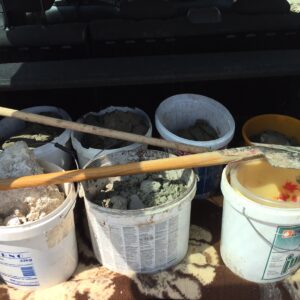 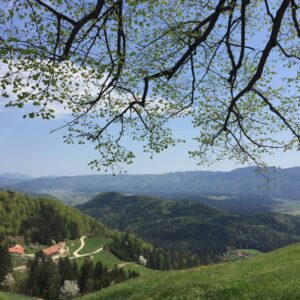